My first hearing loop experience was at the Hearing Loss Association of America (HLAA) convention in Rhode Island last year. At my first workshop, one of the coordinators announced that each workshop was looped so be sure to turn on our T-coils. Excited to try this technology I’ve only heard about, I turned mine on. It took less than five minutes to be totally amazed. I heard so well, I felt like a hearing person for the first time in years, watching the speaker instead of the CART screen. The clarity through the loop was a hundred times better than using an FM system. As a bonus, I heard through my hearing aids alone instead of borrowed earphones or neck loop wondering where they were last and were they cleaned and sanitized? This time I simply pushed a button on my hearing aid and I heard. Why wasn’t there more of this available in America?

I had to find a way to share this technology however I could at home. I wanted other people to experience it and know the difference too. On our local Walk4Hearing committee we had Kristin who works with Listen Technologies. In the past, they supported our Walk with assistive listening devices but I knew they were getting into hearing loops too. Could we loop our Kick Off party for the Walk? Yes, she was willing to set that up for us and even better, she could probably set up a portion of our stage area at our Walk in the park too.

The Kick Off party was small but those of us who were there with hearing aids or cochlear implants, used out T-coil. We sat at our tables and heard the speakers. Listen Tech also looped our registration table making hearing above the noise a piece of cake. The day of our Walk, lots of people showed up and there were signs posted everywhere encouraging people to try the hearing loop. During our entertainment which happened to be a clown who told lots of jokes and stories, I looked around and saw people with hearing aids and CI’s laughing along with the rest of people. Later, speeches came through loud and clear making it a memorable Walk. 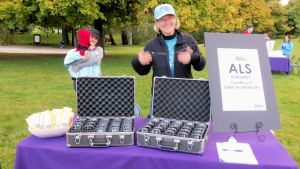 Kristen from Listen Tech pictured here with the ALD’s they handed out at the Walk4Hearing in Salt Lake City.

A few weeks ago, Listen Tech held a convention for their distributors. They invited some of us from the hearing loss community to come to their hearing loop workshop portion. Juliette Sterkens, AuD from Wisconsin spoke first and she gave the best presentation on hearing loss I’ve heard. She talked about who is losing their hearing and why. She explained audiograms. She talked about high frequency hearing loss (the most common type) and what’s it like; how we hear vowels better than consonants and how our mind struggles to fill in the missing pieces.

Giving a visual example, on the screen appeared the sentence, “She saw oars bobbing.” Beneath it was missing letters. Take away the original sentence, she filled in the gaps and it became “She saw cars fueling.” She also ran audio recordings to show exactly what hearing aids pick up in churches, court rooms and restaurants. Then she played a recording of what it sounded like through a loop. The difference is astounding. The hearies in there were beginning to understand our world a whole lot better. (You got to share the link above with hearing family and friends.)

She went on to explain that hearing aids work best within a four foot range picking up the closest and loudest sounds like coughing, papers rustling, babies crying. The speaker twenty feet away is lost in the noise that surrounds the hearing aid user, unless using the loop. The loop brings the speaker right to the ears and cutting out surrounding noise.

Five of us who were hard of hearing sat in the back of the workshop at a looped table where it was impossible to lip read… and we all heard every word Juliette said without the benefit of CART. Normally in this kind of situation, I have to arrive early and make the presenter aware of my hearing loss. I ask them to wear my FM system and face me as much as possible because I use lip reading too. I stake out my position up front and in the center where I still very much struggle to hear. After two hours, I’m exhausted mentally and physically. Here, Juliette talked for almost two hours and I felt no fatigue at all. 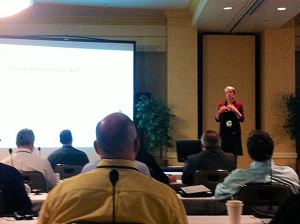 Our view of Juliette from the back of the room. 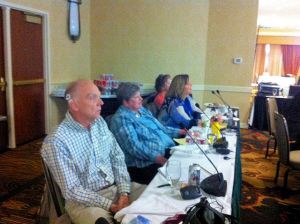 The incredible loop set up at the conference let me hear audience participation as well for the first time in many, many moons. Every chair had a wireless microphone. To ask questions or add comments to the discussion, we each had to turn the mic on which also fed into the loop system. To top it off, a screen at the front of the room had each microphone listed in a diagram. The seating was assigned so anytime someone turned their microphone on, their spot in the room was highlighted red on the chart and their name listed to the left of the diagram. What a fabulous system, incredibly inclusive, for anyone with or without hearing loss. 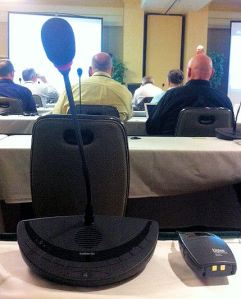 The microphones in front of each seat. 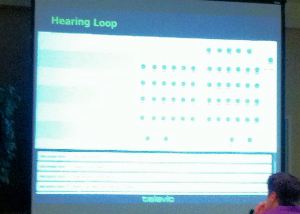 The chart showing who was talking and where.  This isn’t the best of pictures but hopefully you get the idea.

The first half of the seminar was about hearing loss. The second half was the technology side of hearing loops and were invited to stay. I’m not a techie but I’ll give it a go… A loop system consists of an audio source, a loop driver and wiring. Cables or loops are laid around the room according to size and specifications creating a magnetic field which hearing T-coils pick up. It brings sound direct to the ear eliminating audio distance. There are various choices of loop drivers and different ways to layout the wires according to the needs.

As I understand it, past looping systems, which started in the 70’s, had lots of problems which turned off both the users and the people who bought them. Today’s technology has improved by leaps and bounds. Qualified installers are able to get beyond the biggest problems which are over spill and metal interference. Over spill happens when one loop system spills over into another looped room but this can be eliminated with different wiring and layouts. I didn’t understand how they get around metal interference but they do with various techniques. They showed us 6 different layouts and discussed common pitfalls and fixes. All I know is the loop systems I’ve experienced in this last year have delivered terrific sound.

Hearing loops are my favorite way to hear. There’s other technology out there with bluetooth being touted as the next big thing. I have a bluetooth device that connects my hearing aids to my phone. It drains the battery on my hearing aids, the bluetooth device itself and my phone super fast. It’s handy but it comes with a price. Using my t-coil doesn’t drain my hearing aid batteries any faster than normal so I keep them longer. 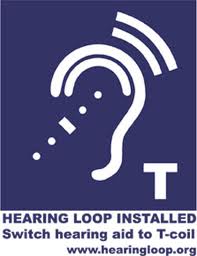 Turn on the t-coil in your hearing aid and give it a try. (Signs are required by the ADA.) Many tourist sites and tours in Europe are looped and it’s gaining popularity here in the USA. Recently the New York subway system was looped in certain places and a taxi company in NY will be looping their cabs soon. Quiet a few churches are getting loops here too as well some colleges, auditoriums and senior centers. Many people are getting their living rooms looped for a higher quality television sound too. How about some places we’d like to see looped: drive thru speakers, bank windows, theaters and meeting rooms. It’s a world of possibilities. 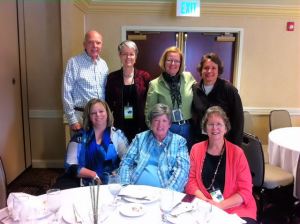 At the end of the workshop with Juliette and Kristin in the back and middle of the row. That’s me in the brown in the back row too.

Here are some further links to check out:

HLAA’s Get in the Hearing Loop